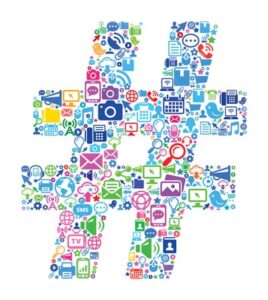 Hashtags are a simple way to you use which helps your social media posts to be more discoverable if used properly.

Hashtags should be used according to the social media platform and this blog shows how to use hashtags more efficiently.

They are metadata that is used in social media platforms used to be found and reach more people after you publish a particular content.

To use hashtags one must put the # symbol in front of a word without any space.

#dotindigitalacademy #performancemarketing #SMM are examples of how to use hashtags. Hashtags don’t always need to be the small case you can use #Dotin or #dotin they don’t come under the case sensitivity.

Why Should You Use Hashtags?

Hashtags have got several advantages.

The hashtags help to show your social media poster to the users even the ones who are not following you. Using trending hashtags will help to give more exposure. It will make your content reach more audiences.

Hashtags will add your social media poster to a category where people follow that particular word hashtag and will create more exposure.

In the case of Twitter if you want to follow or reply to something which is trending you can simply add the keyword used for that trending post and simply add your response.

It is proven that hashtags can increase user engagement to post.

Can You Create Your Own Hashtags?

The answer is Yes, just add a # and keep the word you need and eliminate the space in between them. To become a hashtag trending that particular hashtag should be used by a huge number of users.

Did you know that you can use hashtags for Google searches? Yes, you heard it right. You can just type #dotindigitalacademy and Google will show the results about Dotin

Twitter used hashtags for the first time in 2007 and since it never stopped. The tweets with hashtags proved to reach more engagement than the ones with does not include the hashtag

You can just search with the hashtag of a particular topic on Twitter and all of the posts with that hashtag will appear in the timeline.

Always remember to use hashtags in a more consistent manner this will help you create brand awareness. Keep it simple and limit the length don’t use hashtags that are so long. The use of trending keywords will give more traffic and impressions.

2013 was the date when Facebook started using hashtags. On Facebook, we don’t often see users typing hashtags. But, the method of hashtags is similar to that of Twitter, using the # and word together without any space. It is better to use 5 hashtags on Facebook and if you exceed more then that reach will decline. It allows you to follow the hashtags by simply using # in front of the word you need to search.

YouTube supports hashtags. On YouTube, hashtags are used in titles and descriptions. YouTube hashtags should be used properly. If its algorithm finds out anything suspicious or declared it as spam it will affect your YouTube channel and video views. If used properly, hashtags on YouTube are one of the most efficient ways to portray your content to the audience you are focusing on.

Hashtags got so many merits. The right way of using hashtags can give so much traffic to your content and if you overdo it this will affect you negatively.